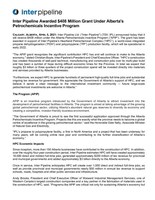 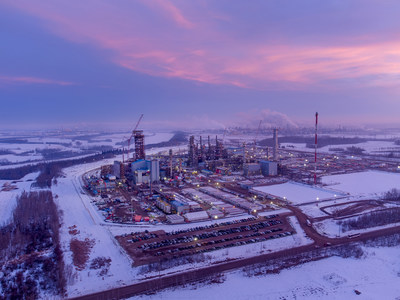 “The APIP grant recognizes the significant contribution HPC has and will continue to make to the Alberta economy,” stated Christian Bayle, Inter Pipeline’s President and Chief Executive Officer. “HPC’s construction has created thousands of well-paid technical, manufacturing and construction jobs over its multi-year build and has been a symbol of hope during difficult economic times for the Province. In total we expect that roughly $3 billion or three quarters of the project construction spend will be invested directly into materials and services provided by Alberta businesses.

“Furthermore, we expect HPC to generate hundreds of permanent high-quality full-time jobs and substantial ongoing tax revenue for government. We appreciate the Government of Alberta’s support of HPC, and we believe it sends a clear message to the international investment community — future large-scale petrochemical investments are welcome in Alberta.”

APIP is an incentive program introduced by the Government of Alberta to attract investment into the development of petrochemical facilities in Alberta. The program is aimed at taking advantage of the growing global petrochemical sector, utilizing Alberta’s abundant natural gas reserves to diversify its economy and creating a competitive, investor-friendly business environment.

“The Government of Alberta is proud to see the first successful application approved through the Alberta Petrochemicals Incentive Program. Projects like this are exactly what the province needs to become a global centre of excellence in the growing petrochemical sector,” said the Honorable Dale Nally, Associate Minister of Natural Gas and Electricity.

“IPL’s propane to polypropylene facility, a first in North America and a project that has been underway for many years, will be coming online next year and contributing to the further diversification of Alberta’s economy.”

Since inception, more than 150 Alberta businesses have contributed to the construction of HPC. In addition, over the roughly four-year construction period, Inter Pipeline estimates HPC will have created approximately 16,000 direct and indirect full-time jobs, generated approximately $200 million of tax revenue for provincial and municipal governments and added approximately $3 billion directly to the Alberta economy.

Once in service, Inter Pipeline anticipates HPC will create over 1,000 direct and indirect full-time jobs, as well as provide provincial and municipal governments nearly $50 million in annual tax revenue to support schools, roads, hospitals and other public services and infrastructure.

Andy Brooks, President and Chief Executive Officer of Waiward Industrial Management Services, one of Western Canada’s largest construction companies and a key partner in the fabrication of materials used in the construction of HPC, said, “Programs like APIP are critical not only for sustaining Alberta’s economy but for creating future growth. At a time when investment is truly needed, this program helps keep tax-paying Albertans working and putting food on the table, while also securing a strong future for Alberta with an exponential payback for taxpayers. Inter Pipeline’s HPC has proven that — and APIP will attract more like it.”

Contracting and procuring locally throughout construction of HPC has brought significant benefits to the project, including superior service, quality, timeliness and lower risk of damage to components during shipping. This locally-focused approach has been especially beneficial in the COVID-19 environment due to the safety and logistical challenges the pandemic has created.

Dennis Perrin, Provincial Director of the Christian Labour Association of Canada (CLAC), a national union that represents thousands of men and women working on the HPC project, added, “Alberta has an abundance of natural resources and projects like the Heartland Petrochemical Complex enable us to utilize these resources in a safe and responsible way. This investment in Alberta creates many good paying jobs for hundreds of Albertans now and in the future and help the economic recovery for families, communities and our province.”

The Building Trades of Alberta (BTA) has also been very active in the development of this historic project with several thousand members finding employment on site since Inter Pipeline broke ground.

“The project’s positive impacts to the province, the community and thousands of skilled-tradespersons is exactly what’s needed to aid Alberta’s economic recovery, and we’re pleased to be a part of it,” said Terry Parker, Executive Director, BTA.

“Couple that with the ongoing work to safeguard employees throughout COVID-19, alongside partners like BTA, and it’s clear Inter Pipeline is a true leader in protecting the health, safety and wellbeing of its workforce, making them a well-respected, highly-valued employer our members are proud to work for.”

HPC will convert locally sourced, low-cost propane into 525,000 tonnes per year of polypropylene, a high value, easily transported and recycled, multi-use plastic used in the manufacturing of an extensive range of finished products such as packaging, textiles, automobile components, healthcare products and medical supplies.

The APIP cash grant will be paid to Inter Pipeline in equal instalments over three years once the Heartland Petrochemical Complex is operational. Inter Pipeline was previously approved to receive $200 million of royalty credits for the propane dehydrogenation plant under the Petrochemicals Diversification Program, but will resign these credits in favour of the more significant APIP grant.

Inter Pipeline is a major petroleum transportation and natural gas liquids processing business based in Calgary, Alberta, Canada. Inter Pipeline owns and operates energy infrastructure assets in Western Canada and is building the Heartland Petrochemical Complex — North America’s first integrated propane dehydrogenation and polypropylene facility. Inter Pipeline is a member of the S&P/TSX 60 Index and its common shares trade on the Toronto Stock Exchange under the symbol IPL.  www.interpipeline.com