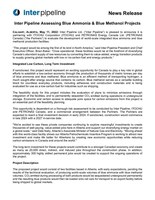 “This project would be among the first of its kind in North America,” said Inter Pipeline President and Chief Executive Officer, Brian Baker. “Once operational, these facilities would be at the forefront of diversifying Canada’s abundant supply of raw resources by converting them to value-added, energy transition products to supply growing global markets with low or no-carbon fuel and energy products.”

If sanctioned, this project would represent an exciting opportunity for Canada to play a key role in global efforts to establish a low-carbon economy through the production of thousands of metric tonnes per day of blue ammonia and blue methanol. Blue ammonia is an efficient method of transporting hydrogen, a much sought-after energy source that contains no carbon. Blue methanol serves as a versatile building block for countless everyday products, including adhesives and construction materials and is being evaluated for use as a low-carbon fuel for industries such as shipping.

The feasibility study for this project includes the evaluation of plans to minimize emissions through integration of the facilities, and to permanently sequester CO2 emitted during operations in underground storage. Economic and certain access to adequate pore space for carbon emissions from this project is an essential part of the feasibility planning.

This opportunity is dependent on a thorough risk assessment to be conducted by Inter Pipeline, ITOCHU and PETRONAS Canada, and a commercial arrangement between the Partners. The Partners are expected to reach a final investment decision in early 2024. If sanctioned, construction would commence in late 2024 with a 2027 in-service date.

“We’re excited to see these private companies continuing to explore meaningful investments to create thousands of well-paying, value-added jobs here in Alberta and support our diversifying energy market on a global scale,” said Dale Nally, Alberta’s Associate Minister of Natural Gas and Electricity. “Moving ahead with this world-class facility shows our Alberta Petrochemicals Incentive Program is working to attract new investment and make life better for Albertans by creating new economic opportunities while reducing carbon emissions in Canada and around the world.”

The long-term investment for these projects would contribute to a stronger Canadian economy and create as many as 20,000 direct, indirect, and induced jobs throughout the construction phase. In addition, approximately 300 highly skilled permanent jobs would be created to support the ongoing operations of the project.

The proposed project would consist of two facilities based in Alberta, with early expectations, pending the results of the technical evaluation, of producing world-scale volumes of blue ammonia with blue methanol volumes. CO2 emitted during processing of both products would be sequestered underground permanently and the resulting blue products would then be loaded onto rail cars for transport to an export facility before being shipped to global markets.

One of the target markets for blue ammonia is Japan, which has set a target to reach net-zero GHG emissions by 2050. As part of that plan, the Japanese Ministry of Economy, Trade, and Industry (METI) announced that ammonia and hydrogen will play key roles in meeting its national clean energy targets in part by replacing coal as fuel in thermal power generation.

The Government of Canada has stated it sees this as a significant opportunity for Canadian ammonia producers, particularly as technological advancements have enabled the production of blue ammonia. Canada’s free trade relationship with Japan through the Comprehensive and Progressive Agreement for Trans-Pacific Partnership (CPTPP) makes Canada an ideal partner and supplier for Japan’s global ammonia supply chain as Canada is among the top-10 ammonia producing countries in the world with Alberta the leading region in the country, producing about 3.5 million metric tonnes of ammonia per year.

The Government of Alberta has identified diversity in the area of petrochemical development as a critical aspect of its Recovery Plan and Natural Gas Vision and Strategy designed to drive growth in Alberta’s petrochemical sector. Attracting investment into Alberta’s Industrial Heartland while achieving climate goals, is key to that success.

Having successfully completed construction of the Heartland Petrochemical Complex, North America’s first integrated propane dehydrogenation and polypropylene plant, Inter Pipeline has proven it can successfully develop a petrochemical mega project. The company has an industry leading regulatory and safety record along with demonstrated project execution experience highlighted by over $9 billion of project capital deployed over the past decade.