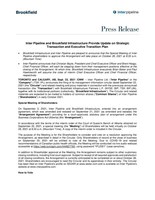 TORONTO and CALGARY, AB, Sept. 22, 2021 /CNW/ – Inter Pipeline Ltd. (“Inter Pipeline” or the “Company“) (TSX: IPL) announces the filing of its management information circular dated September 22, 2021 (the “Circular“) and related meeting and proxy materials in connection with the previously announced transaction (the “Transaction“) with Brookfield Infrastructure Partners L.P. (NYSE: BIP; TSX: BIP.UN), together with its institutional partners (collectively, “Brookfield Infrastructure“). The Circular and related materials are expected to be mailed to holders of common shares (“Common Shares“) of Inter Pipeline (“Shareholders“) in early October 2021.

In accordance with the terms of the interim order of the Court of Queen’s Bench of Alberta obtained on September 22, 2021, a special meeting (the “Meeting“) of Shareholders will be held virtually on October 28, 2021 at 8:30 a.m. (Mountain Time). A copy of the interim order is included in the Circular.

The purpose of the Meeting is for the Shareholders to consider and vote on a resolution approving the Arrangement, as described in detail in the Circular. Only Shareholders of record at the close of business on September 20, 2021 will be entitled to vote at the Meeting. Due to COVID-19 and related recommendations of Canadian public health officials, the Meeting will be conducted via live audio webcast accessible at https://web.lumiagm.com/444827760, using password “IPL2021” (case sensitive).

In addition to Shareholder approval at the Meeting, the Arrangement remains subject to other customary closing conditions, including final court approval. Subject to receipt of all required approvals and satisfaction of all closing conditions, the Arrangement is currently anticipated to be completed on or about October 28, 2021. Shareholders are encouraged to read the Circular and its appendices in their entirety. The Circular has been filed on Inter Pipeline’s profile on SEDAR at www.sedar.com and is available on Inter Pipeline’s website at www.interpipeline.com.

The completion of the Arrangement is subject to, among other things, the approval of two thirds of the votes cast by the Shareholders at the Meeting, as well as majority of the minority approval under Multilateral Instrument 61–101 – Protection of Minority Security Holders in Special Transactions (“MI 61-101“) of the Shareholders (which requires the approval of a majority of votes cast by such shareholders at the Meeting, excluding certain votes of Brookfield Infrastructure and any other person required to be excluded for the purposes of MI 61-101).  Brookfield Infrastructure may vote the Common Shares acquired by it under its takeover bid of Inter Pipeline, which was completed on September 3, 2021, as part of the “minority” approval.

Inter Pipeline announces that Christian Bayle, President and Chief Executive Officer and Brent Heagy, Chief Financial Officer, will each step down from their management positions with the Company effective upon the closing of the Arrangement and be replaced by two Brookfield Infrastructure executives. Mr. Bayle will also resign from the Board of Directors (the “Board“) of Inter Pipeline effective the same day.

“On behalf of the Board and everyone at Inter Pipeline, I wish to thank Chris and Brent for their years of service,” stated Deborah Close, Inter Pipeline’s Chair of the Board. “We wish them success in their future endeavours.”

“It has been extremely rewarding to have been part of growing this remarkable company,” noted Mr. Bayle.  “Both Brent and I have been very fortunate to work with a talented workforce and are thankful for their commitment to Inter Pipeline, and its vision and values. Brent and I wish the company, its people and business partners all the best in the future and we will work closely with Brian and Paul over the coming weeks to support a smooth transition.”

Brookfield Infrastructure Partners is the flagship listed infrastructure company of Brookfield Asset Management, a global alternative asset manager with over US$625 billion of assets under management. For more information, go to www.brookfield.com.

No Offer or Solicitation
This news release is for informational purposes only and does not constitute an offer to buy or sell, or a solicitation of an offer to sell or buy, any securities. The acquisition of the Inter Pipeline common shares and issuance of securities of Brookfield Infrastructure Corporation will be made solely by, and subject to the terms and conditions set out in the Arrangement Agreement.

Information concerning the assets and operations of Inter Pipeline contained or incorporated by reference in the Circular and related documents has been prepared in accordance with Canadian disclosure requirements, which are different from those of the United States. BIPC and Brookfield Infrastructure Partners L.P. financial statements incorporated by reference in the Circular have been prepared in accordance with IFRS, as issued by the International Accounting Standards Board, and they may not be directly comparable to financial statements of United States companies.

Forward-looking information is provided herein for the purpose of giving information about the proposed Transaction referred to above, as well as information on expected executive changes. Readers are cautioned that such information may not be appropriate for other purposes. The completion of the proposed Arrangement is subject to customary closing conditions, termination rights and other risks and uncertainties including, without limitation, court, stock exchange and Shareholder approvals. Accordingly, there can be no assurance that the proposed Transaction will occur, or that it will occur on the terms and conditions contemplated in this news release. The proposed Transaction could be modified, restructured or terminated. In addition, if the Transaction is not completed, and Inter Pipeline continues as an independent entity, there are risks that the announcement of the Transaction and the dedication of resources by Inter Pipeline to the completion of the Transaction could have an impact on Inter Pipeline’s current business relationships (including with future and prospective employees, customers, distributors, suppliers and partners) and could have a material adverse effect on the current and future operations, financial condition and prospects of Inter Pipeline. A comprehensive discussion of other risks that impact Inter Pipeline can also be found in its public reports and filings which are available under its profile on SEDAR at www.sedar.com.