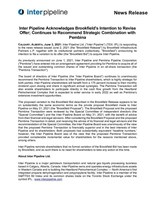 As previously announced on June 1, 2021, Inter Pipeline and Pembina Pipeline Corporation (“Pembina”) have entered into an arrangement agreement providing for Pembina to acquire all of the issued and outstanding common shares of Inter Pipeline in an all-share transaction (the “Pembina Transaction”).

Inter Pipeline reminds shareholders that no formal variation of the Brookfield Bid has been made by Brookfield, and as such there is no need for shareholders to take any action at this time.

Inter Pipeline is a major petroleum transportation and natural gas liquids processing business based in Calgary, Alberta, Canada. Inter Pipeline owns and operates energy infrastructure assets in Western Canada and is building the Heartland Petrochemical Complex — North America’s first integrated propane dehydrogenation and polypropylene facility. Inter Pipeline is a member of the S&P/TSX 60 Index and its common shares trade on the Toronto Stock Exchange under the symbol IPL. www.interpipeline.com