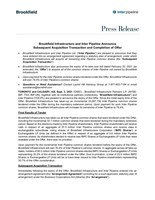 Immediately following the expiry of the Offer, Brookfield Infrastructure and Inter Pipeline entered into an arrangement agreement (the “Arrangement Agreement“) providing for a court-approved, statutory plan of arrangement under the Business Corporations Act (Alberta) (the “Arrangement“).

The Arrangement constitutes the Subsequent Acquisition Transaction contemplated in the Offer, by which Brookfield Infrastructure will acquire ownership of 100% of the Inter Pipeline common shares.

Under the terms of the Arrangement, holders of Inter Pipeline common shares, other than Brookfield Infrastructure, will be entitled to elect to receive the same per share consideration as set forth in the Offer, namely:

The entitlement of holders of Inter Pipeline common shares to receive BIPC Shares or Exchangeable LP Units will be subject to proration as described in the Arrangement.

Copies of both the Arrangement Agreement and the Circular will be made available on SEDAR under Inter Pipeline’s profile at www.sedar.com.

Following completion of the Subsequent Acquisition Transaction, Brookfield Infrastructure will seek to delist the Inter Pipeline common shares from trading on the Toronto Stock Exchange.

Brookfield Infrastructure Partners is the flagship listed infrastructure company of Brookfield Asset Management, a global alternative asset manager with over US$625 billion of assets under management. For more information, go to www.brookfield.com.

Inter Pipeline Ltd. is a major petroleum transportation and natural gas liquids processing business based in Calgary, Alberta, Canada. Inter Pipeline owns and operates energy infrastructure assets in Western Canada and is building the Heartland Petrochemical Complex — North America’s first integrated propane dehydrogenation and polypropylene facility. Inter Pipeline is a member of the S&P/TSX 60 Index and its common shares trade on the Toronto Stock Exchange under the symbol IPL.  For more information, go to www.interpipeline.com.

No Offer or Solicitation

This news release is for informational purposes only and does not constitute an offer to buy or sell, or a solicitation of an offer to sell or buy, any securities. The acquisition of the Inter Pipeline common shares and issuance of securities of Brookfield Infrastructure Corporation will be made solely by, and subject to the terms and conditions set out in the Arrangement Agreement.

Brookfield Infrastructure made the offer and sale of the BIPC Shares in the Offer subject to a registration statement of BIPC and BIP covering such offer and sale which was filed with the United States Securities and Exchange Commission (the “SEC”) under the U.S. Securities Act of 1933, as amended, and which was declared effective by the SEC on August 18, 2021. Such registration statement covering such offer and sale includes various documents related to such offer and sale. INVESTORS AND SHAREHOLDERS OF INTER PIPELINE ARE URGED TO READ SUCH REGISTRATION STATEMENT AND ANY AND ALL OTHER RELEVANT DOCUMENTS FILED OR TO BE FILED WITH THE SEC IN CONNECTION WITH THE OFFER AS THOSE DOCUMENTS BECOME AVAILABLE, AS WELL AS ANY AMENDMENTS OR SUPPLEMENTS TO THOSE DOCUMENTS, BECAUSE THEY CONTAIN OR WILL CONTAIN IMPORTANT INFORMATION. You will be able to obtain a free copy of such registration statement, as well as other relevant filings regarding BIP and BIPC or such transaction involving the issuance of the BIPC Shares and the underlying BIP limited partnership units, at the SEC’s website (www.sec.gov) under the issuer profiles for BIP and BIPC, or on request without charge from Brookfield Infrastructure, at 250 Vesey Street, 15th Floor, New York, New York, 10281-1023 or by telephone at (212) 417-7000.

The Subsequent Acquisition Transaction to be completed by Brookfield Infrastructure is expected to be made in the United States in reliance upon the exemption from the registration requirements of the U.S. Securities Act of 1933, as amended, provided by Section 3(a)(10) thereof and would be subject to Canadian disclosure requirements (which are different from those of the United States).

BIPC is a foreign private issuer and Brookfield Infrastructure is permitted to prepare the offer to purchase and takeover bid circular and related documents in accordance with Canadian disclosure requirements, which are different from those of the United States. BIPC prepares its financial statements in accordance with IFRS, and they may not be directly comparable to financial statements of United States companies.

This news release may contain forward-looking information within the meaning of Canadian provincial securities laws and “forward-looking statements” within the meaning of Section 27A of the U.S. Securities Act of 1933, as amended, Section 21E of the U.S. Securities Exchange Act of 1934, as amended, and in any applicable Canadian securities regulations. The words “believe”, “expect”, “will” derivatives thereof and other expressions which are predictions of or indicate future events, trends or prospects and which do not relate to historical matters, identify the above mentioned and other forward-looking statements. Forward-looking statements in this news release include statements regarding the terms of the Subsequent Acquisition Transaction and the timing thereof; and statements relating to Brookfield Infrastructure’s intention to seek to delist the Inter Pipeline common shares.

Although Brookfield Infrastructure believes that these forward-looking statements and information are based upon reasonable assumptions and expectations, the reader should not place undue reliance on them, or any other forward-looking statements or information in this news release. The actual outcome of future events could differ from the forward-looking statements and information herein, which are subject to a number of known and unknown risks and uncertainties. Factors that could cause actual events to differ materially from those contemplated or implied by the statements in this news release include the ability to obtain regulatory approvals (including approval of the TSX and the NYSE) and meet other closing conditions to any possible transaction, the ability to realize financial, operational and other benefits from the proposed transaction, general economic conditions in the jurisdictions in which we operate and elsewhere which may impact the markets for our products and services, the impact of market conditions on our businesses, the fact that success of Brookfield Infrastructure is dependent on market demand for an infrastructure company, which is unknown, the availability of equity and debt financing for Brookfield Infrastructure, the ability to effectively complete transactions in the competitive infrastructure space and to integrate acquisitions into existing operations, changes in technology which have the potential to disrupt the business and industries in which we invest, the market conditions of key commodities, the price, supply or demand for which can have a significant impact upon the financial and operating performance of our business and other risks and factors described in other documents filed by Brookfield Infrastructure with the securities regulators in Canada and the United States. Except as required by law, Brookfield Infrastructure undertakes no obligation to publicly update or revise any forward-looking statements or information, whether as a result of new information, future events or otherwise.