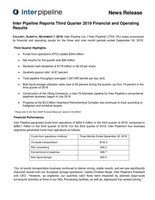 Corporate costs for the quarter increased $10.5 million to $64.5 million as a result of higher financing charges, external services and employee costs.

Inter Pipeline’s payout ratio for the quarter was 86.8 percent.

Funds from operations for the oil sands transportation business in the third quarter of 2019 were $152.5 million, an increase of $2.2 million compared to the third quarter of 2018. Inter Pipeline generates cash flow from this business from a variety of long-term, cost-of-service contracts and is not materially impacted by throughput volume fluctuations.

Average throughput volume of 1,183,500 b/d was realized during the third quarter, a decrease of 43,700 b/d compared to the same period in 2018. The volume decrease was primarily due to third-party operational issues and the continuation of the Government of Alberta’s oil production curtailment program.

NGL Processing
NGL processing funds from operations were $46.2 million for the third quarter of 2019 compared to the quarterly record of $134.8 million in the same period one year ago. Planned turnaround activities at several processing facilities led to materially higher maintenance costs and lower sales volumes, impacting cash flow for the quarter. Lower olefinic and paraffinic frac-spreads also contributed to the weaker results.

Inter Pipeline successfully completed planned turnaround activities at the Redwater Olefinic Fractionator (ROF), Pioneer I and II offgas plants in the third quarter of 2019. The facilities were offline for approximately three weeks which coincided with turnarounds at third-party upgraders. The Pioneer I and Pioneer II offgas plants processed an average of 129 million cubic feet of natural gas per day during the third quarter. Average NGL sales volume from ROF was 25,900 b/d down from 32,300 b/d in the same period of 2018.

Natural gas processed at the Cochrane and Empress straddle plants during the quarter was strong at 3.21 billion cubic feet per day, an increase of approximately 155 million cubic feet per day over the same period in 2018. Approximately 105,900 b/d of ethane and propane-plus was extracted during the quarter, an increase of 8,200 b/d compared to the third quarter of 2018.

In the third quarter, $337.6 million was invested in the Heartland Complex for the procurement of materials and construction services. Construction activities continued to advance according to cost and schedule targets, with the total capital incurred on the project now at approximately $1.9 billion.

Milestones for the third quarter include completing piling activities with approximately 6,500 pilings installed, commencing structural steel erection for the polypropylene plant, and installing the first major components of the central utility block. The last major equipment lifts for the complex were also completed in the quarter with the installation of the propane dehydrogenation flare stack and the 300-tonne polypropylene purge bin.

Volume on Inter Pipeline’s three conventional gathering systems averaged 183,900 b/d for the third quarter, compared to 214,300 b/d in the third quarter of 2018. Volume on the Bow River system increased 4,300 b/d or five percent to 100,200 compared to the same period in 2018 due to stronger producer activity. Volume on the Central Alberta pipeline system decreased by seven percent to 29,900 b/d due to a decline in sour crude volume, which was partially offset by new sweet crude batching activities that began in late 2018. Volume on the Mid Saskatchewan pipeline system decreased 32,500 b/d due to increased competition in the region, inclement weather and reduced drilling activity during the quarter.

Inter Pipeline is currently advancing a multi-phase expansion of its Central Alberta pipeline system. The first phase of this program, an $82 million expansion of Inter Pipeline’s crude terminal near Stettler, Alberta, is progressing on schedule and budget. As part of this initial phase, two new truck risers have been constructed and placed in service in October providing 10,000 b/d of incremental unloading capacity. The remaining project scope includes the construction of two 130,000 barrel crude oil storage tanks which are expected to enter service by mid-2020.

Construction is also underway on the $100 million Viking Connector, the recently announced second phase of this expansion program. This 75-kilometer pipeline will connect Inter Pipeline’s Throne Station on the Bow River pipeline system to the Central Alberta pipeline system in the Stettler area. This project is expected to add an additional 10,000 to 15,000 b/d of throughout volume to the Central Alberta system starting in the first half of 2020.

Inter Pipeline’s bulk liquid storage segment generated strong funds from operations of $30.5 million in the quarter, compared to $14.8 million in the third quarter of 2018. This year-over-year improvement was primarily the result of the newly acquired storage business in the United Kingdom and the Netherlands as well as additional storage contracts secured in Denmark. Overall, the average storage utilization rate during the third quarter improved materially to 92 percent compared to 74 percent for the same period a year ago.

Inter Pipeline announced in August that it is engaged in a structured process to explore the potential sale of this business.  The process is on-going and there are no material updates at this time. Should a sale be completed, potential proceeds would be used to reduce debt and finance our capital expenditure program, including the Heartland Petrochemical Complex.