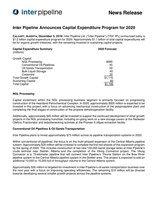 Capital investment within the NGL processing business segment is primarily focused on progressing construction of the Heartland Petrochemical Complex. In 2020, approximately $935 million is expected to be invested in this project, with a focus on advancing mechanical construction of the polypropylene plant and completing the final stages of construction of the propane dehydrogenation facility.

Additionally, approximately $45 million will be invested to support the continued development of other growth projects in the NGL processing franchise, including on-going work on a new storage cavern at the Redwater Olefinic Fractionator and debottlenecking activities at the Pioneer II offgas extraction facility.

Inter Pipeline plans to invest approximately $75 million across its pipeline transportation systems in 2020.

Within conventional oil pipelines, the focus is on the multi-phased expansion of the Central Alberta pipeline system. Approximately $35 million will be invested to complete the first two phases of this expansion program by the spring of 2020. This includes construction of two new 130,000 barrel storage tanks at Inter Pipeline’s crude terminal near Stettler, Alberta and the completion of the Viking Connector project. The Viking Connector is a 75-kilometer pipeline that will connect Inter Pipeline’s Throne Station on the Bow River pipeline system to the Central Alberta pipeline system in the Stettler area. This project is expected to add an additional 10,000 to 15,000 b/d of throughput volume to the Central Alberta system.

Approximately $30 million is targeted for investment in Inter Pipeline’s oil sands transportation business over the next year with a focus on improving operating efficiencies. The remaining $10 million will be directed towards developing several smaller growth projects across the pipeline systems.

Inter Pipeline is planning to spend approximately $40 million in 2020 to meet increased demand for storage at certain European facilities. Several smaller enhancements and efficiency projects will also be completed at facilities located in the United Kingdom, Sweden and Germany, and Amsterdam.

The majority of capital associated with the bulk liquid storage assets will be invested if the business is retained following the completion of a previously announced sales process.

Inter Pipeline expects to invest approximately $80 million in sustaining capital expenditures in 2020. Approximately $40 million will be directed toward replacement of process equipment and infrastructure such as control room upgrades and a water pipeline replacement project at the Cochrane extraction plant. A further $30 million will be allocated to ongoing upgrades and efficiencies to the bulk liquid storage assets, with the remaining $10 million spent on a variety of smaller projects across our pipeline transportation businesses.

Inter Pipeline continues to maintain a strong balance sheet with significant liquidity available on its committed revolving credit facility. Funding for Inter Pipeline’s 2020 capital program is expected to be provided through a combination of undistributed cash flow from operations, capacity available under its existing $1.5 billion revolving credit facility, the periodic issuance of new term debt and proceeds from existing dividend re-investment programs.

Certain information contained herein may constitute forward-looking statements that involve known and unknown risks, assumptions, uncertainties and other factors. Readers are cautioned not to place undue reliance on forward-looking statements, including, but not limited to, statements regarding: (i) the forecasted amounts and allocations of the capital expenditure program for 2020 among various growth and sustaining capital expenditures and the potential benefits to be derived from such expenditures; (ii) the timing, cost and anticipated benefits of capital expenditures (including the Stettler Station expansion, Viking Connector, HPC and plan to meet increased demand for storage at certain European facilities); (iii) the ability of Stettler Station expansion and Viking Connector to enhance our service offering to conventional oil producers in both the Alberta Viking and East Duvernay producing regions and position Inter Pipeline as a leading transportation option serving emerging light oil production from the East Duvernay and Viking formations; (iv) the ability of Inter Pipeline to maintain a strong balance sheet with significant liquidity available on its committed revolving credit facility; and (v) the ability to fund Inter Pipeline’s 2020 capital expenditure program through a combination of undistributed cash flow from operations, capacity available under its existing $1.5 billion revolving credit facility, the periodic issuance of new term or hybrid debt securities and proceeds from existing dividend re-investment programs. Such statements reflect the current views of Inter Pipeline with respect to future events and are subject to certain risks, uncertainties and assumptions that could cause the results of Inter Pipeline to differ materially from those expressed in the forward-looking statements. Factors that could cause actual results to vary from forward-looking information or may affect the operations, performance, development and results of Inter Pipeline’s businesses include, among other things, risks and assumptions associated with operations, such as Inter Pipeline’s ability to successfully implement its strategic initiatives and achieve expected benefits including Inter Pipeline’s ability to make capital investments and the amount of capital investments, including those described herein which may be subject to change. Such information, although considered reasonable by Inter Pipeline at the time of preparation, may later prove to be incorrect and actual results may differ materially from those anticipated in the statements made. For this purpose, any statements that are not statements of historical fact may be deemed to be forward-looking statements. Forward-looking statements often contain terms such as “may”, “will”, “should”, “anticipate”, “expects” and similar expressions. Such risks and uncertainties include, but are not limited to, risks associated with operations, such as loss of markets, regulatory matters, environmental risks, industry competition, potential delays and cost overruns of construction projects, and the ability to access sufficient debt or equity capital from internal and external sources. You can find a discussion of those risks and uncertainties in Inter Pipeline’s securities filings at www.sedar.com. The forward-looking statements contained in this news release are made as of the date of this document, and, except to the extent required by applicable securities laws and regulations, Inter Pipeline assumes no obligation to update or revise forward-looking statements made herein or otherwise, whether as a result of new information, future events, or otherwise. The forward-looking statements contained in this document are expressly qualified by this cautionary note.

All dollar values are expressed in Canadian dollars unless otherwise noted. 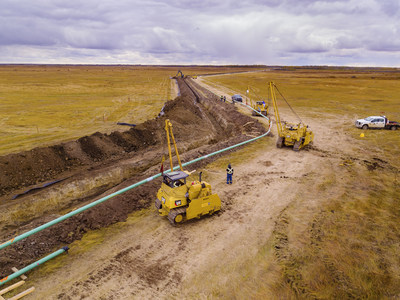 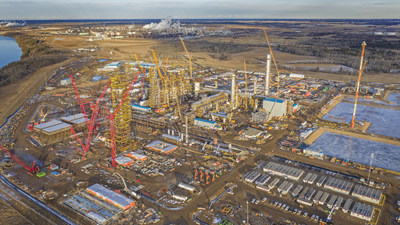